Inside the crenellated walls, across the drawbridge, the buildings of the Borgo succeed one another along the via maestra (the main street), creating an extremely evocative route. They feature edifices from Piedmont and Valle d’Aosta, juxtaposed to form an inhabited area animated by craft workshops – from the fountain to the overhanging roof of the baker’s oven, the farrier’s workshop and the Hospice where pilgrims were once accommodated. Under the portico of the Casa di Bussoleno is a paper mill with an ancient hammer for fraying rags to make paper. Seventeen main buildings, with passages to the outside which interrupt the continuity of the arcades, where the shops and artisan workshops stand facing one another, and a number of open spaces are enlivened by the sound of fountains and embellished by the church and monumental façades.

Move over the map to discover the buildings

Map of the buildings making up the Borgo 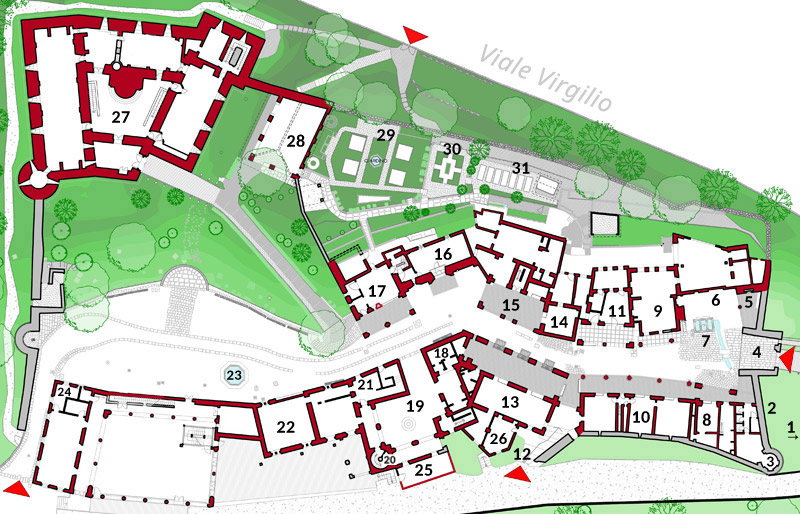 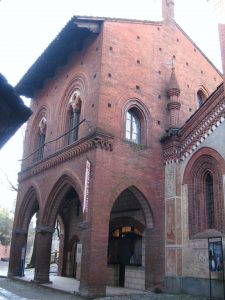 It takes its name from the Casa della Porta Ferrata in Avigliana, one of the main medieval centres in Piedmont, which still preserves important examples of 14th and 15th-century architecture. 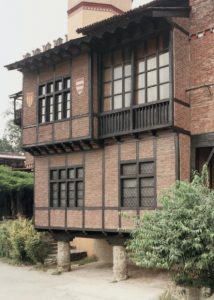 The main façade facing the River Po, made of wood-framed brick, is based on original houses in Borgofranco and Borgomasino, in the Canavese area. 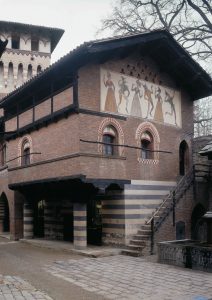 The house is inspired by a residence of the noble Aschieri family in Bussoleno, owner of large estates in the Susa Valley. 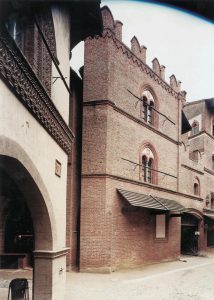 The model for this austere building crowned with battlements is the imposing residence of the Villa family near Chieri. 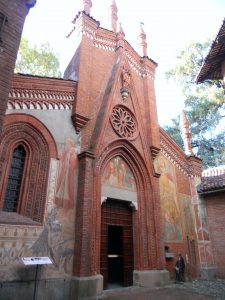 The building with its rich pictorial and terracotta decorations is a combination of various models based on a number of different medieval buildings in Piedmont.

Read more about the Church

The courtyard, with angular tower, bordered by buildings featuring porticoes and loggias, takes its name from the clock tower in the Borgo Nuovo of Avigliana.

Read more about the Cortile and Torre di Avigliana 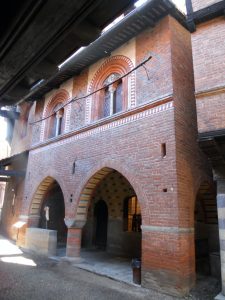 Inspired by a historic building still preserved in Frossasco, in the Pinerolo area, the house is characterised by a large portico on the ground floor where commercial and craft activities are located.

Facing the River Po, this house features a high wooden platform and takes its name from the Malgrà Castle near Rivarolo Canavese, used as a model for the decoration of the windows.

Based on an imposing 14th-century mansion in Mondovì, the residence of the Bressani family, but reduced by one floor for static reasons and to make it equal in height with the neighbouring houses. 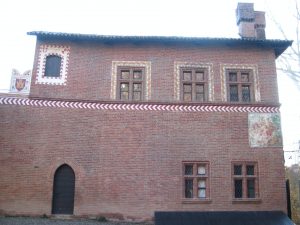 It is located before the access point to the River Po and is characterised by a Renaissance spirit. The main view is towards the river, where a courtyard shaded by trees was once located. 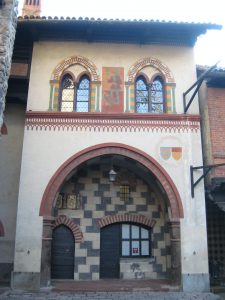 This is the typical care facility found in the towns of medieval Europe. These buildings, usually located at the entrance to the town, welcomed travellers, the sick and beggars. 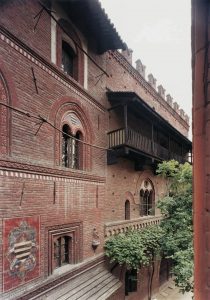 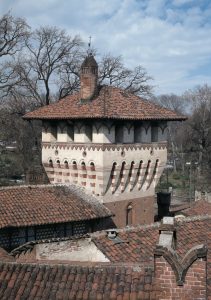 The tower-house is a residential and defensive structure rising above the other buildings. One of the towers of Alba, a town in the Langhe, was used as a model for its construction. 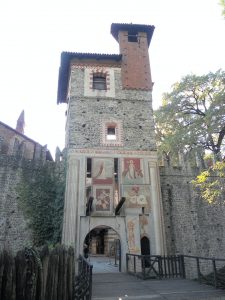 This is the entrance to the Borgo Medievale, made of brick and stone, copied from that of the Ricetto of Oglianico, in the lower Canavese district. It has two entrances: a larger one for carts and horses, and a smaller one on the right, called a postern, for pedestrians. 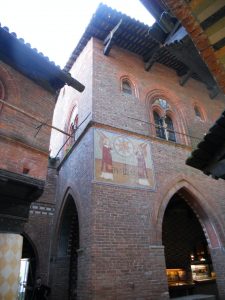 The main model of this house dates back to a 14th-century building on the main street of Alba, an important centre of the Langhe. Intended to accommodate craft and commercial activities, it has a spacious portico with a richly painted ceiling which reproduces that of a house in Chieri belonging to the Villa family of merchants and bankers.

One of the most spectacular buildings on the main street is inspired by the House of Cuorgnè known as the House of King Arduin, an example of the homes of wealthy families in 15th-century Piedmont. 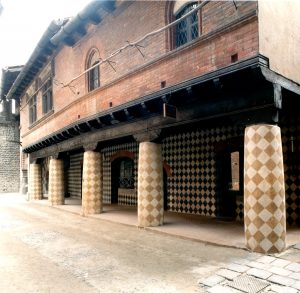 The building, made up of two units of different heights and supported by five painted pillars, was copied from a house that still exists in the old-town centre of Bussoleno, in the Susa Valley.

In the small square with the oven (5), at the entrance to the Borgo, is a stone fountain with the date 1484 engraved in Gothic characters “MIL CCCC LXXXIIII” (7). The water spurts from a vase raised high on a small column, to be drawn into large containers placed on the metal bars crossing the basin. Fountains of this type, with a quadrangular or polygonal basin decorated with small arches and a column surmounted by a cup, are to be commonly found in the upper Susa Valley: for the Village, those of Salbertrand and Oulx were taken as models.

The well, which serves the entire village, is in the Avigliana courtyard (19). The wellhead is the only authentic 15th-century artefact in the Borgo: it comes from a house in Dronero owned in 1884 by Cavalier Giuseppe Voli d’Avena. It bears the coats of arms of the families who could exercise rights over the use of water from the water table: the Marquises of Saluzzo and the Berardi, lords of San Damiano.

The largest square in the Borgo takes its name from the reproduction of the refined fountain of Issogne Castle, in Valle d’Aosta, dating back to the early-16th century (23). Made of wrought iron, it represents a pomegranate tree.
It was made for the Piedmont pavilion at the International Exhibition in Rome in 1911; it has been painted and gilded, as was the original at the time, according to the notes made by Alfredo D’Andrade in 1887. It was placed in the Village courtyard in 1928, on the occasion of the celebrations for the tenth anniversary of the victory in the First World War and the five hundredth anniversary of the birth of Emanuele Filiberto, the Duke of Savoy who moved the capital from Chambéry to Turin.